I recently purchased a black Monique wig off of eBay in the style “Bebe” in hopes that it would suit my Marshall Lee inspired Azone Obitsu hybrid. Monique wigs are well liked in the BJD community, as they are very good quality and can be heat styled.

I’ve been having the worst time trying to purchase a wig for my Marshall Lee doll, because most of the wigs out there in this small of a size are for tiny/childish BJDs, and so the hair styles are very childish as well (think… mushroom bowl cut). XD I’m sorry to say that my search will still continue, because check this out:

That’s a lot of poof. Also, it reminds me of Early Bieber, circa the mid 2000’s. And not in a good way. Also, the wig stained my boy’s head! Luckily, I got most of it off with a magic eraser.

I can actually tell you exactly what this wig reminds me of, but I’m not sure how much of it will make sense XD. There’s this manga called Hirunaka no Ryuusei. If you ever plan on reading this manga, **SPOILER ALERT**

The main character is this straight forward, kind of odd high school girl from the country side who moves to the city to live with her uncle. She falls in love with her teacher, who deep down also has feelings for the girl too, but keeps himself from acting on his feelings but is also unable to truly reject her. That guy, when he was younger, dated this girl with a tomboy-ish hair cut who broke up with him to pursue her career. Later in the manga, the tomboy-ish hair cut girl comes back into the picture and is all like “You kids don’t know anything about life. I’m an adult, so I know more than  you. I participate in mature relationships, and as kids, you children should go run off and play,” and she tries to lock down the teacher in a casual relationship. I DON’T LIKE THAT CHARACTER!

I’m tempted to buy a small amount of black alpaca, and trying to make a wig myself. Or attempting to make one out of yarn as practice, but the last time I tried that, I got frustrated during the part where I had to brush out the yarn strands and then sew them onto the wig cap.

Other than the wig, this boy doll will just need some red converse shoes ^^. I’m really happy with how his outfit came out, and I’m going to try to be patient with his wig situation.

I worked on my Marshall Lee (inspired) hybrid doll this morning! I’m pretty happy with the results, though he doesn’t really resemble Marshall Lee from Adventure Time yet. I think an on point wig, and the perfect outfit will definitely help make the reference more obvious. 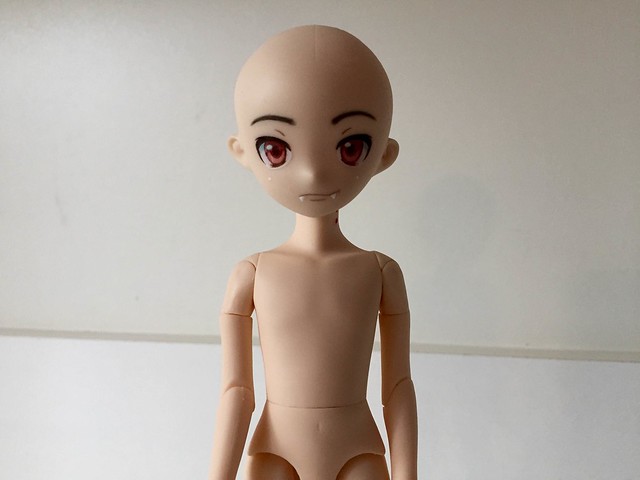 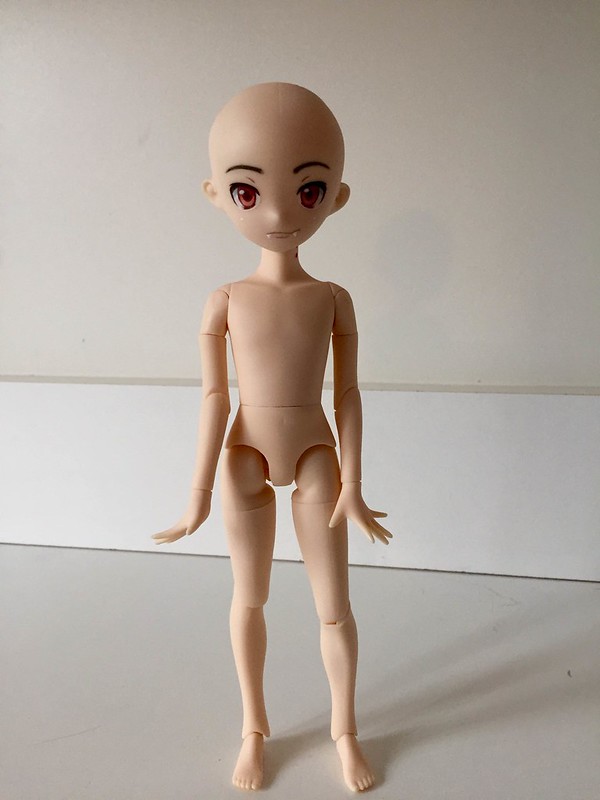 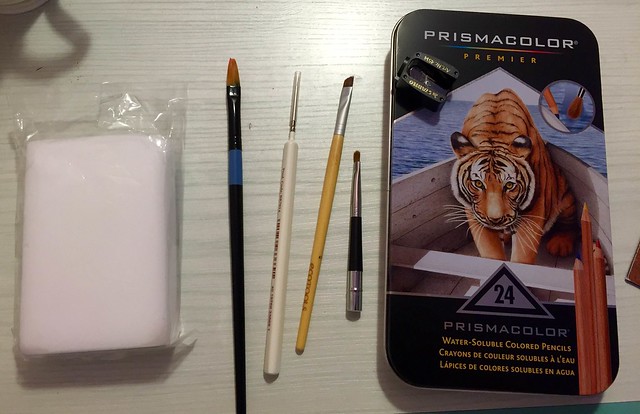 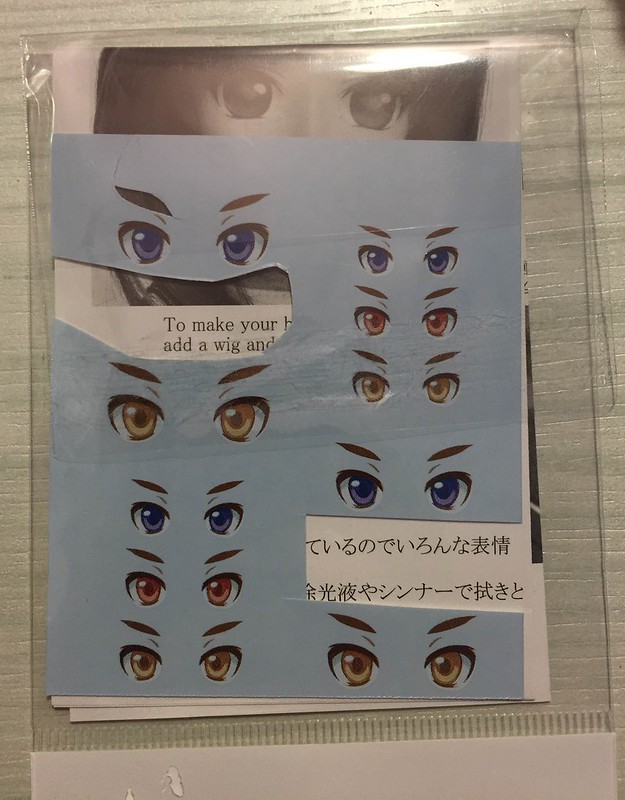 First off, I’m really happy with how the decals came out! I ended up using the biggest pair of reddish eyes that came in the set of eye decals, as the 2nd to biggest were surprisingly too small for the Petite P Chan face. The decals are a bit grainy in the image quality, which is a bit disappointing, but the decals themselves are lifesavers for those of us who suck at symmetry and drawing/painting. Parabox offers a large variety of eye styles, and I thought the ones I chose were both cute and sharp looking, kind of like a cat. Word of warning, they are REALLY fragile. I accidentally nicked one of the eyebrows and the eye I wanted to use with my fingernail. I ended up not using the decal brows because I didn’t think they did anything for the doll’s face, and I fixed the eye with a bit of acrylic paint. I also finished the eyes off with a bit of Liquitex Gloss Varnish to give the eyes a bit of life-like shine, and I hope that the bit of gloss will increase the longevity of the eye decals. I mention this because I’ve read on a few sites that the decals aren’t that great for soft obitsu heads as they are prone to cracking or chipping away if the head is squished or anything.

Here’s some helpful tutorials I referred to when I applied the decals:

Secondly, I want to talk about the Army Painter Psycho brush! I purchased mine off of the Junky Spot, because I wanted a tiny detail brush for when I customize my dolls. It is exactly what I was looking for in a brush! It has a super fine tip, and the bristles aren’t floppy, which is major if you want precision. I haven’t found anything comparable at my local arts and crafts stores or hobby stores. 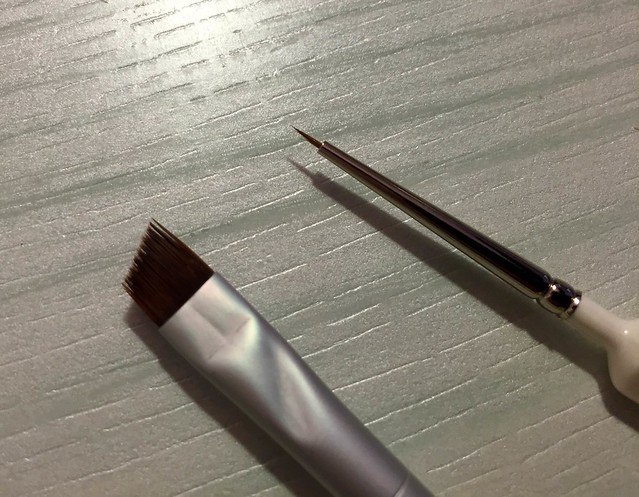 This is a closeup of the Army Painter Psycho brush next to one of my angled eyeliner makeup brushes (I think it’s from Ecotools).

My next challenge for this guy is finding the perfect wig. It’s actually kind of hard finding a short boy’s wig for this size head that doesn’t look childish (and mushroom-like) or just extremely long (I’m not all that confident with cutting hair). I have Marshall Lee’s flannel shirt on the way, so all he needs is a pair of jeans and some red converses!

Maybe one day, when his current face-up needs to be redone, I’ll attempt to dye him grey to be more true to the character!