I recently purchased the Nintendo 3DS game Story of Seasons. It’s made by the same company that makes the Harvest Moon games (repping Harvest Moon since SNES yo), and I would even put this game in the same universe as the Harvest Moon series. So far, I’ve logged about 40 hours into the game, and I’m at the tail end of the Fall season of the First year. I know… it’s exactly how it sounds… I spent 40 real life hours playing a game where I’m a farmer on a farm in a quiet little town. I actually named my character after my cat, and my character’s hairy brown cat after me. 😀 So technically, my cat is living the farm life, and I’m living the life of the cat. 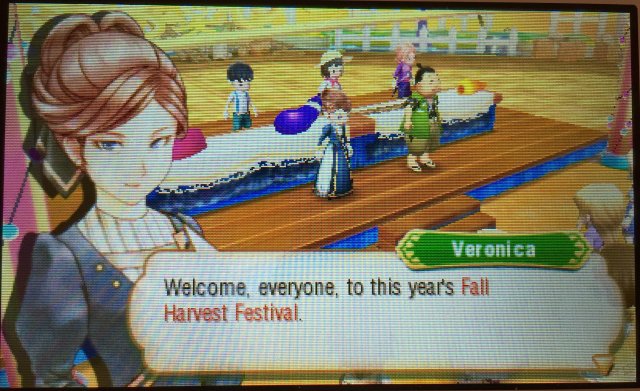 The objective of the game is to run a successful and competitive farm, boost the town’s economy by opening trade with other countries and increasing tourism. As a new member of the town, you’ll also want to make friends with the townspeople and even marry one of the eligible bachelors or bachelorettes of the town.

My character’s waifu. Check out those pink flowers.

There are a few subtle differences between Story of Seasons and the typical harvest moon games, some I like and some I don’t.

Things I’m not too keen on:

Here are the games I’ve played in the series: /humblebrag

My next 3DS game purchase will most likely be the new Animal Crossing game, which if it’s anything like it’s predecessors, is a game about paying off the mortgage to your house :D.