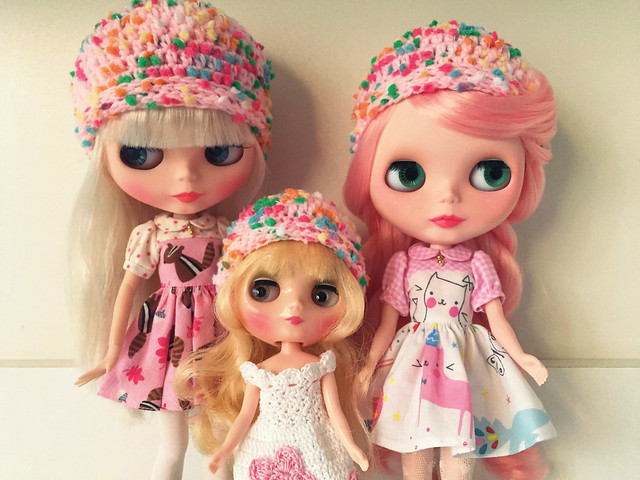 Bryn – “Obviously, I wear this hat best. I think you two should go change.” 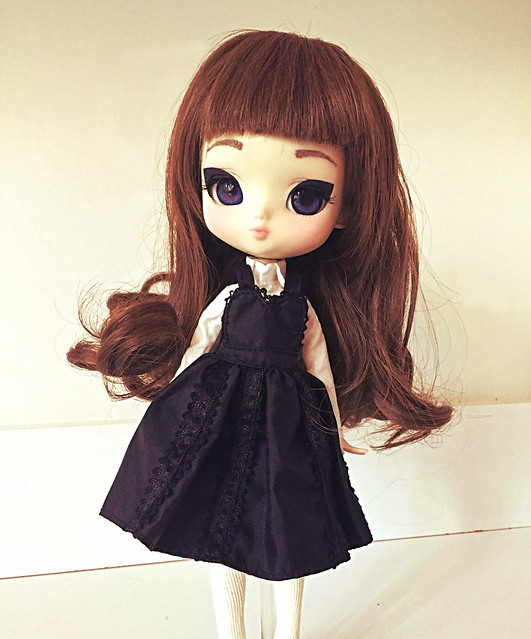 I use a spending tracker app on my iphone – something I don’t recommend if numbers and money bums you out. It summarizes how much I’ve spent in each category, and since the beginning of the year Food and Hobby have been going toe to toe in the contest of On What does Olive Spend the Most Money On (Food is undefeated). So, I’ve decided to go on a low-buy/no-buy of sorts in both categories. I will be packing lunch from now on and brewing my own coffee in the morning. Also, no more adding to my shelf of dolls until either My Melody comes out or if I am able to make it to the mecca known as Blythe Con Chicago.

That said… the doll  budgeting comes a bit easier knowing I did some damage in the past few days. Here is my mail roll call:

I’m thinking of naming her Lucy after Luffy’s colloseum alias in One Piece, or Merryweather (to be shortened into Merry).

I can’t wait for this stuff to start making their way to my mail box one by one.

It’s kind of funny actually. I struggled with naming my Yeolume Podo, mostly because I wasn’t sure what to make of her. For almost a week of having her, i thought her name was pronounced “Yuh-reum/Yuh-leum,” which means “Summer.” It’s actually pronounced “Yul-me” (awful romanization of Korean), which I guess means “fruit” (I think it’s actually a bit broader than just fruit. I think it’s basically anything that is a product of a plant that holds seeds). I ended up naming my Yeolume doll Summer :D.

Annndd I ended up sanding her face off and redrawing it. >_< 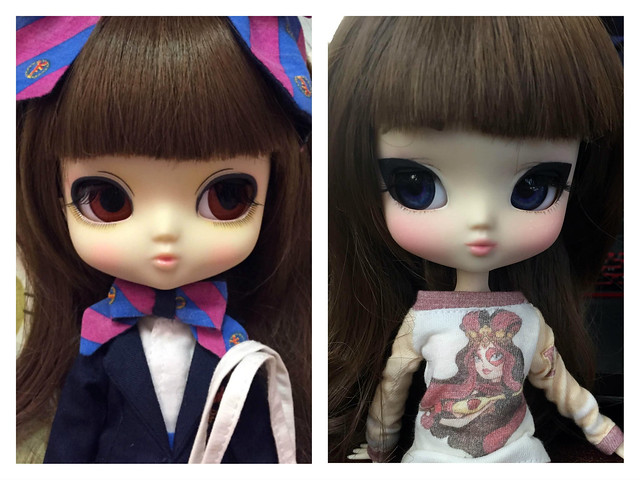 It was HARD! I am really not an artist – in elementary school, I really wanted to be a mangaka, but I kind of gave it up when I realized I am awful at drawing. This is kind of how I draw:

I have trouble with symmetry and proportions :(.

Anyway, I struggled with Summer’s face up. It was also drizzling, and I didn’t realize it until I went outside to see if the MSC had dried on Summer’s face plate. 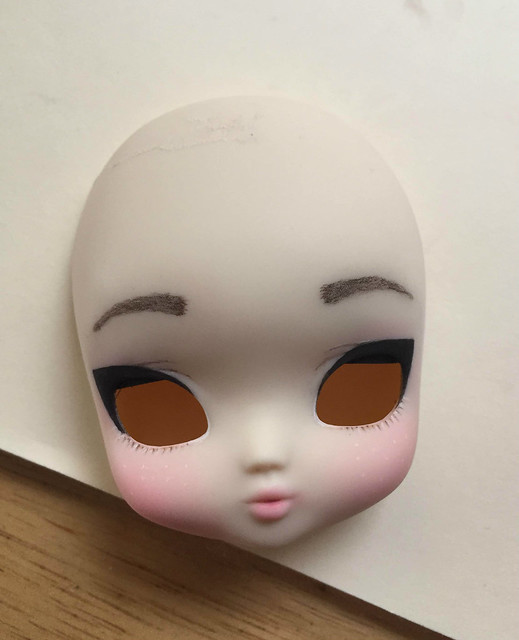 I was also feeling especially ambitious today, so I rebodied her as well! 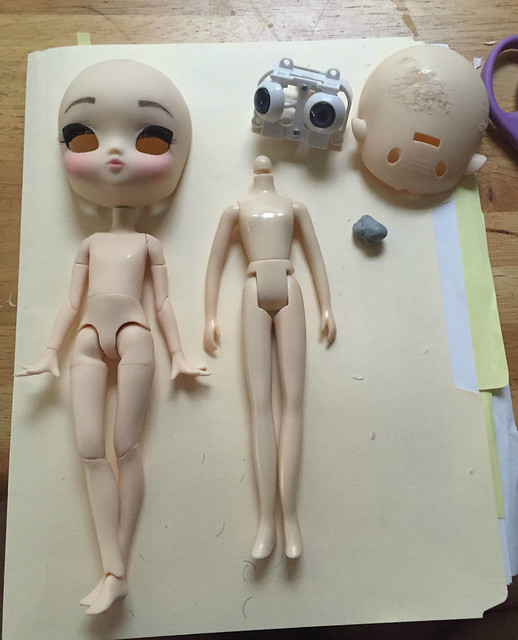 This part wasn’t as complicated as I thought it would be! I pretty much followed this tutorial, and I purchased the epoxy putty and the screw at my local hardware store for pretty cheap. I put Summer on the Pure Neemo Flexion XS body in white skin, which I purchased from eBay.

I didn’t have saran wrap to kind of cover up the hardened epoxy putty before closing up Summer’s head… hopefully the putty doesn’t react weirdly with the doll’s plastic. The packaging said it was safe to use on most plastics, and I did some research and it looks like people use epoxy putty to mod their dolls regularly. I’m exhausted from frankening Summer that at this point I shall leave it to the dolly gods. (I know, what kind of house doesn’t have saran wrap?) 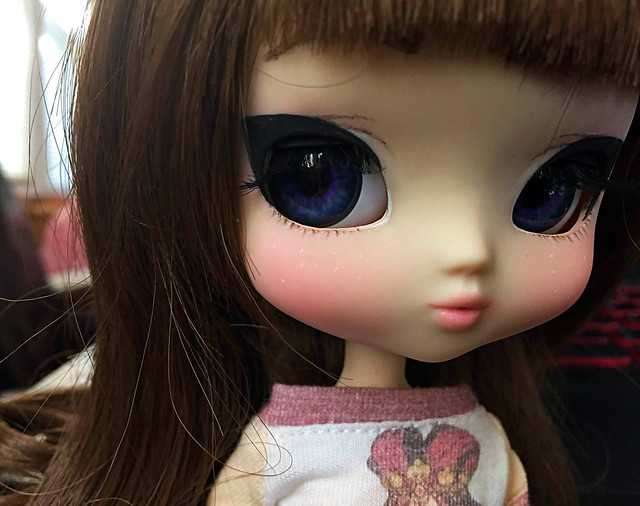 I also gave Summer some new eye chips! I purchased them from Kirakirameanssparkle’s Etsy store,.and I like them a LOT better than the chips she came with. They’re not a perfect fit – they’re slightly smaller than the sockets, but I don’t think it’s that noticeable. You also really can’t beat the price for such pretty chips. I have two more pairs of eye chips that I’m excited to put in my future dolls. 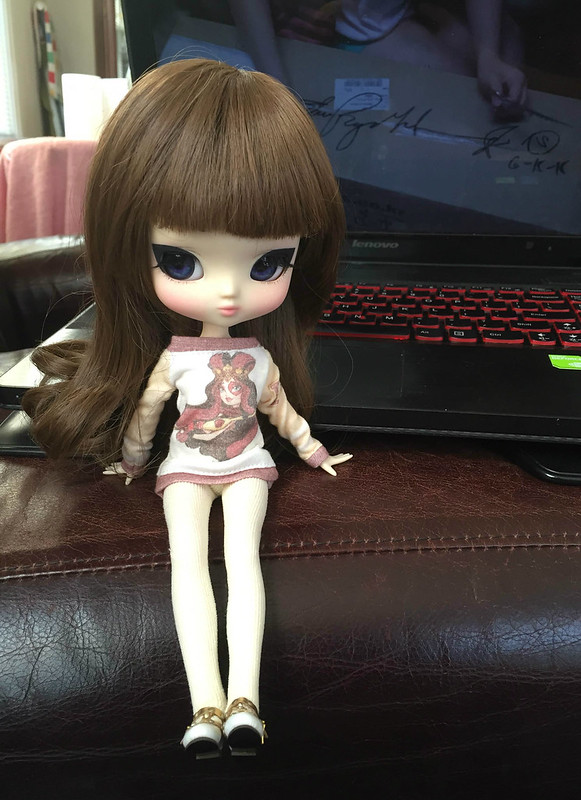 😀 That’s Summer chilling while I watch some BJD deboxing videos on youtube.

Summer doesn’t have the best face up (the eye fold lines bother me :(), but I really love her new overall look! (/secretly proud because I got so much done and those eye folds aren’t THAT bad…). I think this weekend, I will make Summer a yarn wig!!

Meet another addition to my doll collection – a Yeolume Podo! It took about one full day for me to realize that Yeolume is Korean for “summer.” “Podo” means grape ^^. Yeolume is the future daughter of Pullip (like Chibi-usa to Sailormoon… Right?)

The first time I saw this doll was on Les Jeunette’s blog. She has customized her Yeolume, and I’m considering doing the same but I lack the confidence of doing a better job than her current faceup.

I have, however, redressed her! Her shoes totally don’t match, but I was delighted when the Lambellina Ever After High Sweater fit!

My thoughts on this particular doll:

Yeolume’s wig is top notch- it is SUPER soft and very cutely curled at the bottom. I really like her school girl stock as well. Everything but the blazer has Velcro as a closure. Her stock is also very well made (that headband though… Will not stay on her head for anything). Her eyes move left to right like a middie, but instead of a dial, there is a switch. Ummmm… I’m not a big fan of the feel of the doll. Her joints are way too loose so everything swivels far too easily. She also doesn’t give off an expensive feel.

Yeolume is a cute doll! Not sure yet if I will name her.